Productions – Would You Still Be You 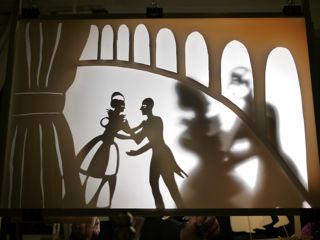 Would You Still Be You

(A 20-minute performance for live actor, musician, and 2 shadow puppet performers. Conceived with Luis Tentindo, who designed and directed this collaboration) Lance, a young man, turns his dull train commute into the life he wishes he could live. At one stop he performs an extravagant waltz in a Viennese Ballroom.  At another, he becomes an ancient Japanese equestrian archer. He goes scuba diving and he learns how to play the taiko drum.  The shadow puppets create the dream-like world that mirrors how human fantasy and reality mix.  At the end, Lance realizes everyone has fantasies.  But the piece goes on to subvert this mundane insight.  As the train enters a pocket of mist, the man hears waves.  Lance is on a raft.  He looks around and he sees a young woman.